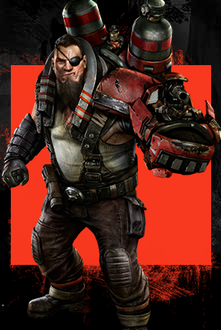 Assault is one of the classes available to Hunters in Evolve. There are three Assault Hunters: Markov, Hyde and Parnell.

The Assault is the combat backbone of the team. They're the ones who bring the most pain, and the ones who can soak up the most of it too. Whether it's Markov with his Lightning Gun and Arc Mines dishing out crowd control, Hyde's Flamethrower and Minigun dealing sustained heavy damage, or Parnell self-destructively attacking with his Multifire Rocket Launcher and Combat Shotgun, the Assault in charge of outputting the most sheer damage. And with their standard issue Personal Shields, you can trust them to stay up long enough to do just that.

The Assault's Personal Shield is what seperates them from the dead. When activated, it provides the Assault with temporary invulnerability to damage from any hostile sources (Not from themselves, however!) for it's duration. It lets the Assault keep doing what they do best - Running into combat guns blazing. Keep in mind that it doesn't protect you from being knocked around, however.