Maggie is one of the many Hunters in Evolve, and is the starting Trapper character.

A quiet woman with a past shrouded in mystery, Maggie is a loner. For years her only companion was Daisy, her faithful pet Trapjaw. Who needs friends when you have a 400-pound alien dogbeast at your side? When Daisy finds their prey, Maggie relies on her Machine Pistol and Harpoon Traps to bring it down.

Maggie is a trapper by trade, meaning that the following loadout is focused on controlling the Monster, leaving heavy damage to the rest of the team.

Maggie excels at tracking, particularly with the help of her trapjaw Daisy, who is always following the monster’s trail. While Daisy can be a very valuable resource, when playing against a monster that is constantly on the move, you might reconsider relying too heavily on Daisy as you could get stuck trying to play catch up, always a few moves beyond the monster’s trail. In combat, Maggie’s machine pistol allows you to fire rapidly and deal a lot of damage, but keep in mind the recoil is quite high. Utility wise, she can strategically lay down harpoon traps that, when activated, will fire a harpoon that can restrict the monsters movement. In general, in order for Maggie to be most effective, she should be played with some fore-sight in mind.

Maggie can use a handful of specialty strategies to better deal with the challenges in Evolve:

When in doubt, look to Daisy 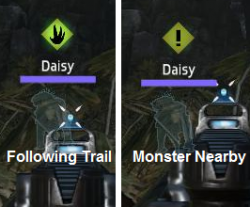 If the monster is stealthy enough to sneak away from you, look to Daisy for direction, as she can follow hidden tracks. If Daisy has no trail to follow, she’ll follow you with no icon overhead; if she picks up a trail, a footprint icon will appear over her. If she senses the monster nearby, an exclamation sign will flash and she may point in the direction that she senses the monster (see below images).

Daisy can also help revive teammates that become incapacitated, so it is wise to draw the monster’s attention away from downed allies so Daisy can get to them safely. Additionally, she will count as a fifth player, so as long as she’s alive, there is still chance for reinforcements to arrive.

Be generous with laying Harpoon traps 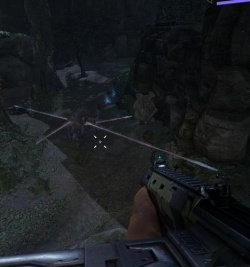 Spread out the harpoon traps as you traverse the map, and plant them more frequently before engaging in a fight with the monster. Keep in mind you can only have 5 static deployable items active in the world, but their reach is further than you might think, planting several traps close by can negate their effectiveness. While on the hunt and not in combat, plant a trap every so often and spread them out.

Every trap that fires, the monster has spent some effort to break it, or get caught. During a fight, while your team is focused on doing direct damage, try running around the monster planting traps in a circle –though don't forget to actually shoot the monster as well!

At medium to longer ranges, Maggie’s machine pistol’s weapon spread is so wide that most shots will miss – try firing in short bursts to regain accuracy and reduce the weapon spread.

Maggie’s main strength is her ability to keep on the monsters trail with Daisy. Her other Mastery is based on using her equipment properly. In order to unlock Griffin, you must complete the first rank of Maggie’s Mastery.