Markov is one of the twelve Hunters in Evolve, and is the starting Assault character.

We all have dreams. Markov's just happens to be dying in glorious battle. This explains his desire to go toe-to-toe with giant Monsters. But his deadly arsenal consisting of a Lightning Gun, Arc Mines, and a near impenetrable Defense Matrix means that dream may never come true – and that's just fine with his fellow Hunters.

The Assault Class is a role that is a staple in many squad-based shooters, and functions as both a massive damage dealer and damage absorber, called "high-DPS" and "tank", respectively. Markov comes with a large health pool, and paired with a lightning gun and an assault rifle, Markov is the ultimate juggernaut. Perhaps more important than the straight brawn exemplary of the class, Markov's kit also includes arc mines which can be used as crowd control to move enemies into position and close off escape routes. Supporting this tactical role is the default defensive item of all Assault Class kits, the pesonal shield, which provide short bursts of immunity from a set amount of damage.

Though Markov can be a single-deep juggernaut, like other characters he is best used in conjunction with other hunters and skillsets, especially considering the healing benefits of the Medic Class which is perfect for boosting his longevity.

Markov is an assault-oriented character, and as such, his weapons focus on dealing massive amounts of damage over a short amount of time. The following weapons are part of Markov's default loadout: 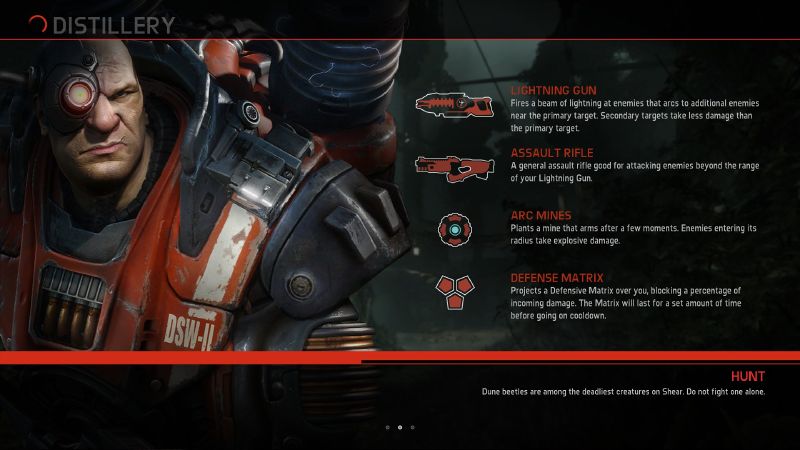 Like all assaults, they have the highest damage potential over any other class. In combat, Markov is the most accurate and consistent damage dealing assault. He is capable of staying at close to mid-range with his lightning gun to apply consistent damage, but can also still apply damage at long range with his electronic assault rifle. In terms of utility, he can toss out arc mines that will deal damage to creatures in close proximity if detonated while armed.

Markov can use a handful of specialty strategies to better deal with the challenges in Evolve:

Whenever a fight happens, generally both sides are trying to make progress by wearing the other side down. As the assault class, you can dish out the most damage per second (DPS) to wear down the monster. During an engagement, do your best to avoid losing line of sight with the monster, getting knocked into bad spots, planting mines at critical times, or anything that might prevent you from doing damage while in line of sight with the monster. You want to always be able to apply constant damage to the monster.

The lightning rifle is a short range weapon that is 100% accurate as it locks onto targets and bounces on to nearby targets, so it does consistent damage. If the monster is being difficult to get close to, switch over to the electronic assault rifle. While it has the potential to do more damage to the monster with head shots or weak points, most people lack the accuracy to efficiently utilize the assault rifle. So stick with the lightning rifle and whenever it is empty, switch and use your other items while it recharges.

Try placing arc mines at the tops of cliffs

Before entering a fight, plant several mines and alert your team to their location so they know where they can go to your "Trap Zone". Placing the mines atop cliffs are great because if the monster climbs up the cliff face, they will climb right into it.