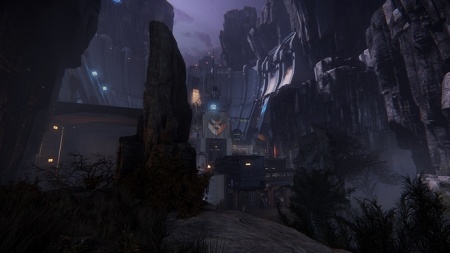 Shear is the planet where the bulk of Evolve takes place.

Shear is a resource heavy planet that is currently in the process of colonization. The planet, which has been outfitted with power generation dams and food production facilities is populated largely by aggressive wildlife which has resisted attempts at human settlement. The largest of the threatening creatures are known as the Monsters. These megalithic creatures have the ability to quickly evolve by consuming meat, and dominate the ecosystem of Shear. They are challenged by an extremely powerful and well-trained contingent of humans known as the Hunters. This elite group of men and women are tasked with capturing and destroying these monsters for the good of all mankind and the peaceful settlement of Shear.

Combat in Evolve takes place over multiple unique maps. There will be sixteen different maps available upon release, though four have been confirmed thus far.

The nature of the Monsters

The Monsters themselves are of a unique, interesting origination; while they were originally seen as possibly being native to the planet, it seems that they too are an invasive species. This would explain why the natural fauna on Shear are as aggressive to the Monsters as they are; the Monster itself as an invasive predator.

The weather on Shear ranges wildly from territory to territory. In Evolve, several weather effects will be encountered, changing the environment and appearance of the various maps featured.