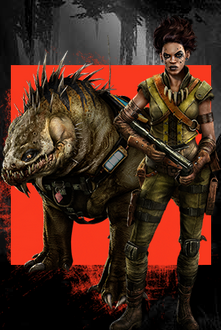 The Trapper is one of the classes available to Hunters in Evolve. Currently, there are four base Trappers: Maggie, Griffin, Abe and Crow and one alternate - Electro Griffin.

The Trapper's role is twofold - Find where the Monster is, and then make it stay there as long as possible. Each of them is equipped for these two roles - Maggie has her loyal trapjaw Daisy to help her follow the monster's tracks and harpoon traps for area denial, Griffin uses Sound Spikes to be able to locate the monster and his Harpoon Gun for keeping the monster in place, and Abe employs Tracking Darts to track the monster and its food and Stasis Grenades to slow the monster to a crawl. Any Tracker worth his space-salt knows how to use his tools and wits to track down the Monster quickly and how to make sure the rest of his team is able to take it down. All Trappers have the Mobile Arena to help them with exactly that.

The Mobile Arena is the Trapper's most iconic ability, and arguably the most valuable one. When used, it projects a large dome of energy that prevents passage through its walls, trapping everyone and everything inside it until its power runs out, the Trapper turns it off, or until the Trapper himself is downed. Using the Mobile Arena is crucial for successful hunting, as it's the only guaranteed way to make sure the Monster can't get away from the Hunters (for a while, anyway).